Went street performing for the first time in Asheville this year and received the most amazing gift to start the season! 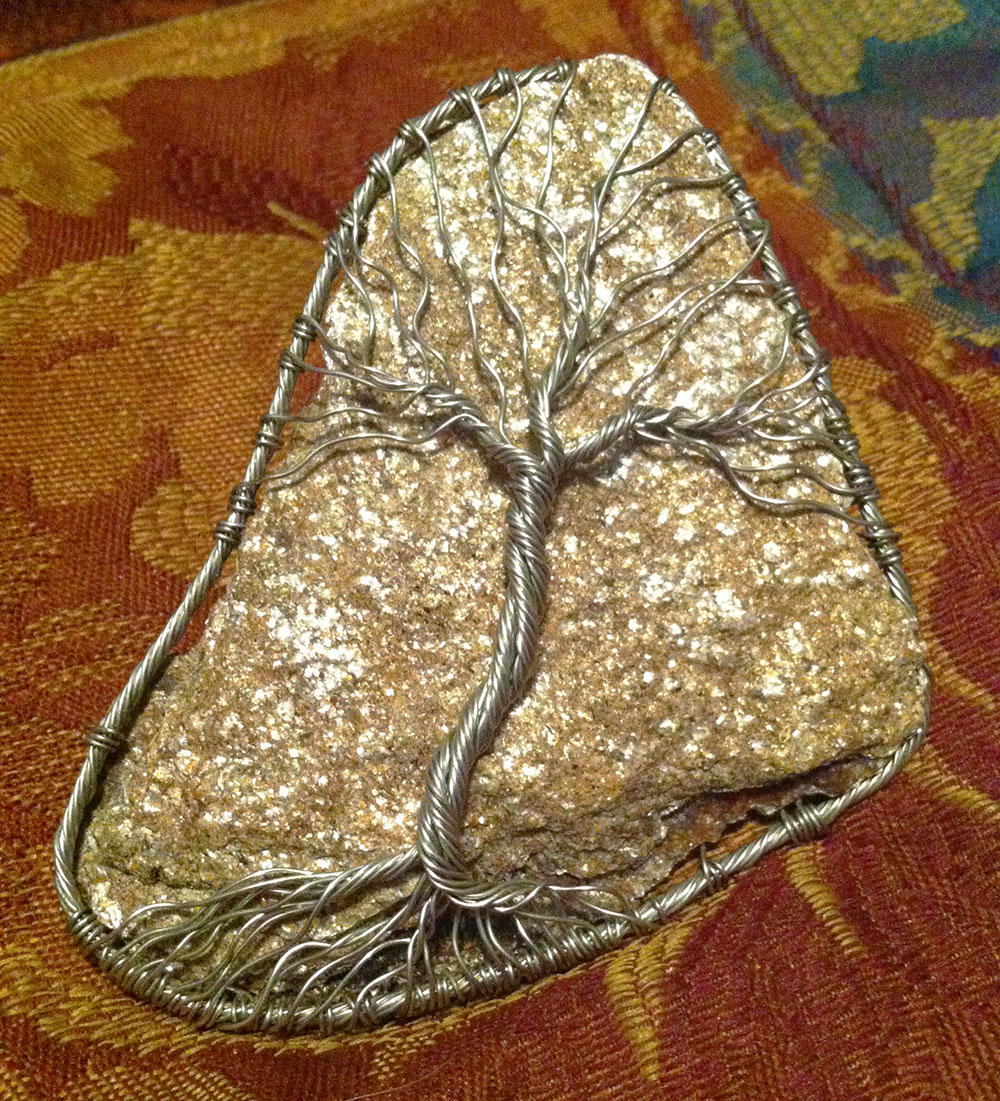 this was created by my friend scavenger who travels the country by train selling his wire art. he picked the mica out of a spring in california. neat!

sometimes i’m out on the street as much as 9 or 10 hours in a day, performing music for up to 7 of those hours. i’ve met a lot of interesting people during this time, like this kid who looks as if he’s kicking butt and taking names: 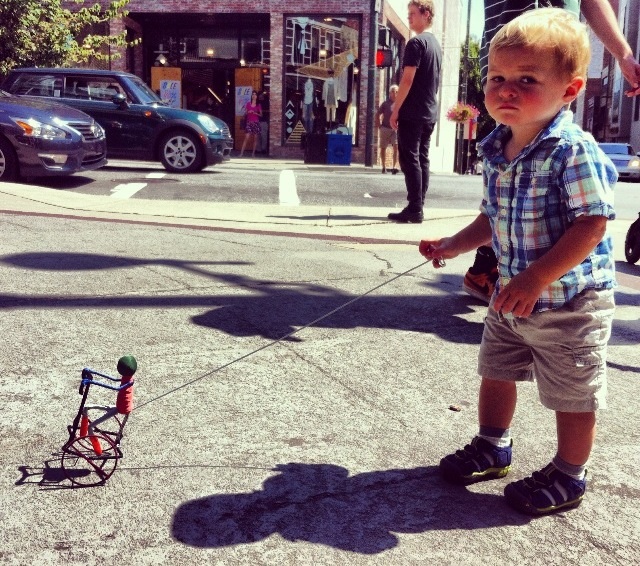 …little does he know that he’s actually being one of the most adorable children i’ve ever seen on the streets of asheville! and yes, i know what you’re thinking: when he walks the little man on a bike does pedal with his feet. and then there’s the regulars, like cherokee here who lives on the street but you would never guess it at first glance. cherokee has a strong spirit and a big heart. 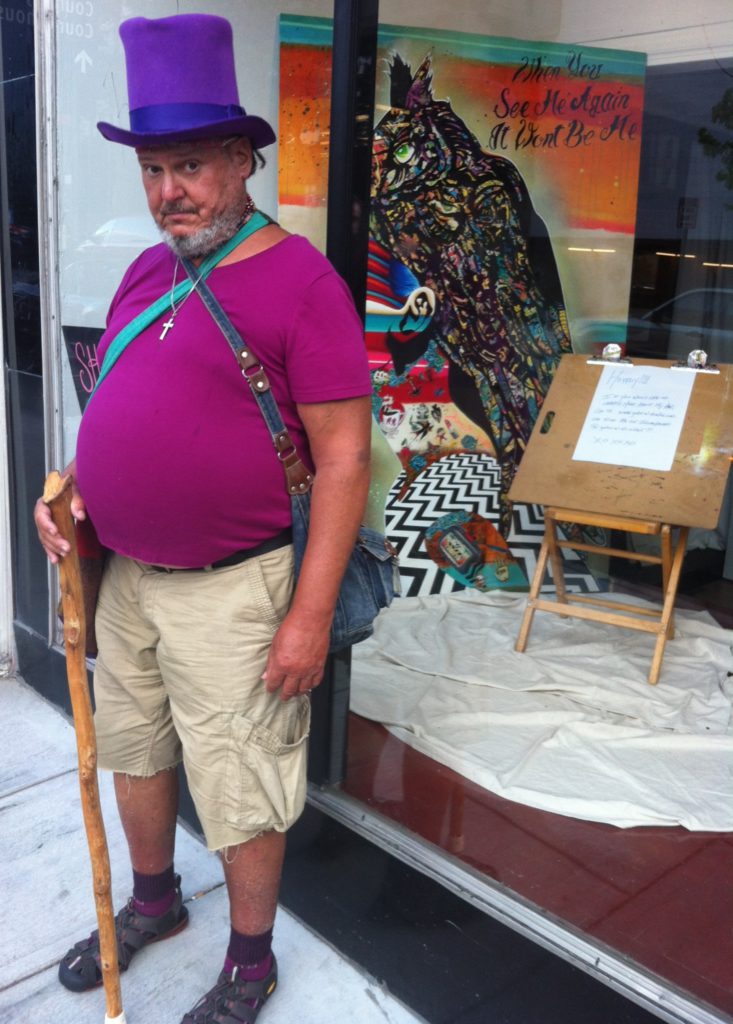 i’ve learned a lot from the folks out here, especially the ones that live on the street. they teach lessons you’d never pick up in school or by reading a book. it’s a culture and a tight knit community, with little gems to be found hidden away all over the streets. i’ve become both a better performer and a better person from all the time spent out here. there is the monetary value of raising money for the new album but then there is something else… life lessons that can’t always be put into words, which will take me farther then any dollar received in a tip jar. all i have to do is listen, keep my eyes open and stay humble.

hanging out with a fellow violinist on the streets of asheville north carolina.

his mom sent me this photo. adorable!

here’s a normal day for me on the job.

new orleans epic jam. need i say more? had a blast jamming out with tanya & doris and friends on the corner of royal street and st louis!

we had a happening last night on the streets of asheville north carolina. doesn’t happen very often (pun intended) but when it does.. whew it’s magical. here’s a snapshot i grabbed in between playing violin tunes.

yeah he was painting while i played music! and there were dancers, balloon twisters (do you see the miniature jerry garcia balloon in the top right corner?), plus face painting! it was magical.

Where has To All My Dear Friends been for the last 4 months? No touring. No album release. No site updates. So what has been going on? Don’t worry! There has been plenty of bustle.

Remember awhile back when we wrote about the concept of busking, or street performing? Marc has taken it to a whole new level this year. First he upgraded his gear, which included creating his own portable and rechargeable power source (we hope to write about this soon in an upcoming article). Then, with little to no rehearsing, Marc journeyed to the streets to create all new performances. Not only was everything performed live but Marc also chose to create entirely new music, often times completely improvised in the moment.

Performing on the street is more than just developing perspective and creativity. There’s quite a bit of opportunity for exposure and financial gain. “I was about halfway done with the new To All My Dear Friends’ album and I ran out of money. It’s always been a DIY effort for me. Probably due to the fact that I grew up poor and also because I have an insane work ethic. Little resources is what I’m used to. Find a way to make things happen and then do it. Period. So I hit the streets, and I hit them hard. It’s crowd funding without a computer!”

There’s almost a month of studio time invested in the new album, recorded in both Ohio and Florida. Plus a vinyl and CD release is slated for next year. Be sure to keep an eye out for updates on the new album. If you’re not signed up for the newsletter, than you should do it here. With tourist season coming to an end in the Appalachian Valley, Marc will dedicate this winter to finishing the album, composing a soundtrack for an upcoming film, and refining his sound for some big activity next year.

introducing to all my dear friends, performed by a duck.

i don’t actually sing on the streets

but is sure does look it.